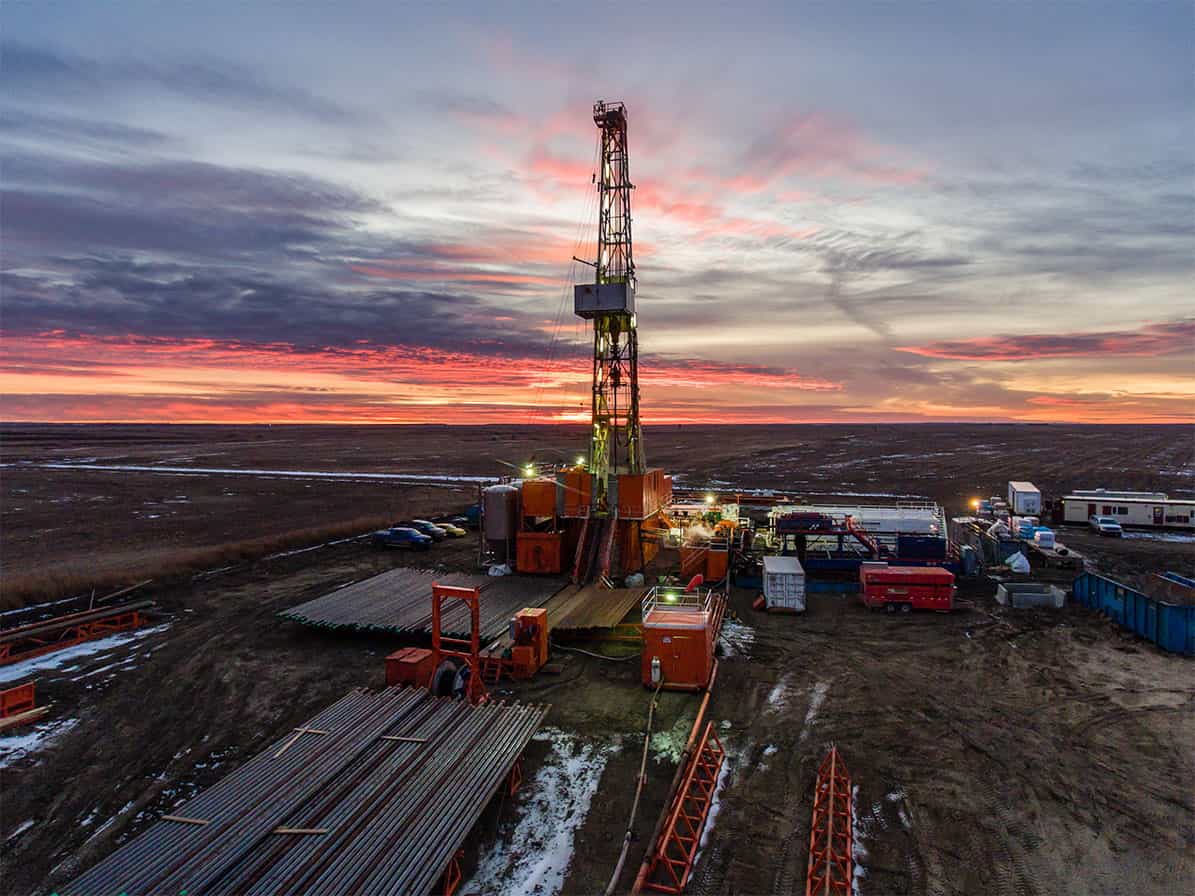 Torquay – Saskatchewan’s geothermal electricity power generation project is heavy into its winter drilling program, with two wells done and three more planned before breakup. One of those well broke their own record for the deepest well in Saskatchewan, at 3,632 metres true vertical depth.

DEEP Earth Energy Production Corp. (DEEP) announced on Jan. 20 that the 2019-2020 winter drilling and testing program is underway. DEEP intends to drill up to 5 stratigraphic wells by the end of March 31, 2020, to further define the field’s geothermal reservoir parameters. Drilling contracts have been awarded to Weyburn-based Panther Drilling Corporation.

The first of these new wells, Border-02A, was completed in December. It was drilled from the same surface location as DEEP’s first well, Border-01, directionally to the southwest with a bottom hole located 1,500 metres from Border-01. It was drilled to a depth of 3,834 metres measured hole depth, (3,490 metres true vertical depth from surface). Panther Rig 2 did the drilling.

DEEP’s third well, Border-02B has been drilled to a depth of 3,898 metres measured hole depth, (3,632 metres true vertical depth from surface) on January 19, 2020. Border-02B was drilled from the same well bore as Border-02A as a whipstock that enabled the acquisition of additional data between Border-01 and Border-02A at a reduced cost compared to drilling a separate well from surface. Border-02B exceeded the record depth of Border-01 by an additional 102 metres true vertical depth, giving title to this new well as the deepest ever drilled in Saskatchewan, the company said. Border-03, 04 and 05 will be achieved with two drilling rigs in order to complete the program prior to Spring road bans.

DEEP president and CEO Kirsten Marcia noted on Jan. 20, “Plans are evolving by the minute.”

The wells in this winter program may be used for monitoring or injection, but they will not be used for producing the hot brine, the resource necessary for geothermal power production. Marcia said, “They are too small to be production wells.”

They want to drill full production wells later this year.

The first three wells (01, 02A, 02B) were drilled from the same pad, and the next well might be drilled from that pad as well. However, wells 04 and 05 are planned to be drilled from two separate, distinct sites within a few kilometres of the original location. Drilling is expected to proceed within the next couple weeks, Marcia said on Jan. 20. Each well is projected to take roughly 30 days.

A loop test is planned for this spring, using well 01 and one of the other wells. Which one has not been determined yet.

DEEP noted this winter drilling program will greatly increase the confidence in the geological model and test the recently acquired 3D seismic data. It will also test regional airborne magnetic data geological interpretation. The multi-well program will achieve flow testing and injection testing to optimize the locations and design of full-sized production wells planned to be drilled later in 2020 and 2021. The wells from this winter program will also have significant value in monitoring the reservoir response during and after large scale drilling development required for full geothermal field development.

“We just did a huge core,” Marcia said, noting they’ve been analyzing it in Calgary. Logging is underway now, she added.

In August 2019, DEEP completed a flow and pressure build up test on Border-01 to assess reservoir pressure and well deliverability. The pressure data affirmed the existence of fracture flow contributions often sought after in geothermal projects. The stimulated maximum production rate for this well supports the potential for an economically viable project.

Following the flow and build up test, a series of injectivity and fall-off tests were conducted. These tests further affirmed that a significant portion of the fluid contribution produced from the well is sourced from a fractured reservoir system. Upon completion of these tests, the remaining brine in the tank farm was disposed into the well which accepted the fluids at high rates, limited only to the capacity of the injection pump. This test confirmed the reservoir’s capability to flow in both directions – to produce as well as accept injected fluids.

The results of the winter drilling and testing program will provide detailed data required for the final subsurface and facility design required for full construction. The reservoir data will be incorporated into a full-scale simulation model to design the full production wells, optimal well spacing and full field development. This data will also be implemented to optimize the final surface power facility design.