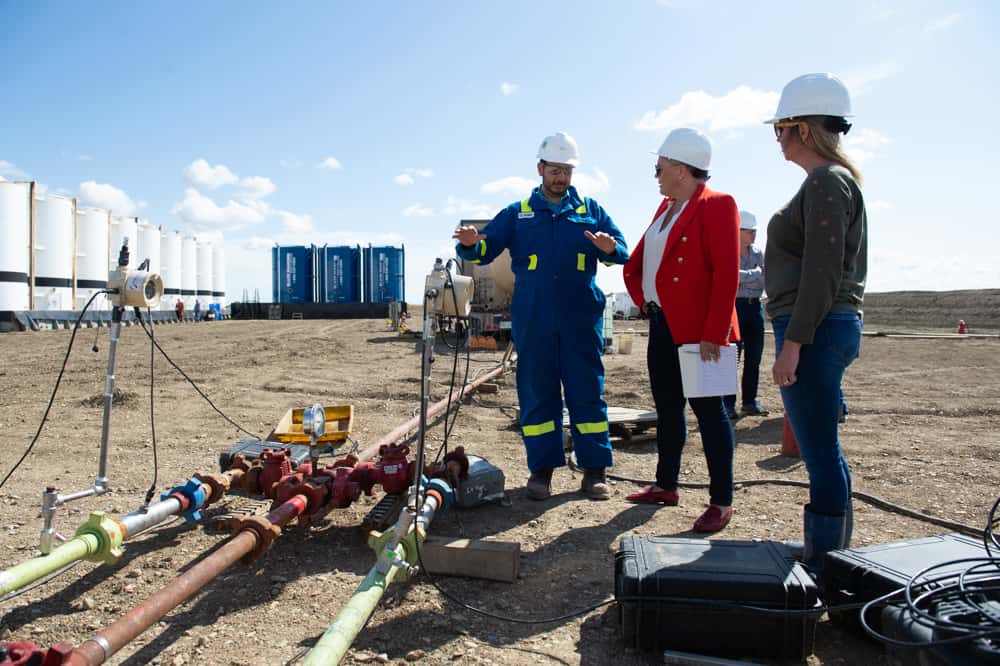 Torquay – With a recent $5 million private placement of funding in place in addition to previously announced federal and provincial government money, Deep Earth Energy Production Corp. (DEEP) has begun flow testing of its first well for a geothermal electrical power production facility south of Torquay, within sight of the U.S. border.

The first well, drilled in late 2018, was put on production on Aug. 25. But it’s not producing oil or gas. It’s producing really, really hot briny water, hot enough that you can feel the heat coming off the tanks the water is being stored in. The intention is that when all is said and done, that water from a hot aquifer will be used in an Organic Rankine Cycle power plant to produce electricity.

But long before they get to that point, DEEP needs to get a few things sorted out, and that’s where August’s test comes into play.

On Aug. 26, DEEP president and CEO Kirsten Marcia showed Tina Beaudry-Mellor the operation. Beaudry-Mellor holds three ministerial postings; Minister of Advanced Education, Minister responsible for Innovation Saskatchewan, and Minister Responsible for Status of Women Office, all three of which she felt were applicable to this project. “It’s interesting how much those three things intersect today,” she said.

The province, through Innovation Saskatchewan, has been one of the backers of the project. SaskPower has signed a power purchase agreement with DEEP to buy the electricity produced.

Beaudry-Mellor made a point of asking those involved about their educational backgrounds, where they got their training and how the got to Saskatchewan. “I’m interested in all those things,” she said.

“I’m really impressed. The renewable energy and drilling space is a bit new for me, so I have a lot of questions to ask. I think there’s a tremendous potential here.”

She noted a bit of a “blue-sky discussion” about a renewable energy hub, minerals and the possibility of monetizing other products from the geothermal work that’s being done here.

Dave Brown is the project engineer for drilling and completions. He said the approximately 220 metres of core retrieved from the 3,530 metre-deep vertical hole was analyzed during spring breakup. Now the hole saw a downhole electric submersible pump (ESP) at the end of 3.5 inch tubing. “It’s now sitting at 2,500 metres,” he said.

There’s a dedicated 1 megawatt (500 horsepower) diesel generator adjacent to the hole, powering the ESP. There’s enough fluid in the well that the ESP is placed roughly 1,000 metres above bottom, which means it takes less energy to bring that fluid to surface. Also, deeper than 2,500 metres is the prairie evaporite formation, so thicker casing is required beyond that point.

This phase of flow testing has several purposes.

“We started production at a lower rate and ramped it up over 12 hours,” Brown said. The hot water, really a brine, first goes through three settling tanks before entering the 27-tank farm which will be used as temporary storage. While the initial flow from the well was dark, it soon cleared up, as evidenced by samples drawn into a bucket.

“We got some solids initially, but not anymore,” he said.

The storage tanks are filled one at a time. The expectation was they would be filled in three days.

Brown said the well would then be shut in for 12 days after the initial three days of flow. “After 12 days, we’ll move a service rig back in, pull the pump and recorders, and then recomplete it as an injection well for the next step. We’ll put a packer in and a triplex pump and run it through a filter system, reinjecting it into the hole.”

The reinjection is also expected to take three days. The total duration of the test work is estimated at 50 days.

Overall, he noted this phase confirms the resource is there. Furthermore, this supplementary data collected will be analyzed by subject matter experts to identify other brine constituents that may extracted to be of additional value to the Williston Basin Geothermal Power Facility.

“The plan is to drill the next well,” Brown said. That’s planned for the latter half of September.

That second well is expected to be drilled adjacent to the first well, but instead of going straight down, they will use directional drilling to go off at an angle such that the toe of the well will be at roughly the same vertical depth, but end up 1.5 kilometres to the southwest.

The result will be something of a triangle. The second well will be the producer, pulling hot brine from the ground. When the power plant is in place, the brine will run through the plant. But for testing purposes, it will be reinjected into the first well, which will function as an injector. That test is expected to take 60 days.

That will create something approximating a closed loop in that they will re-inject into the same formation they are drawing from.

“Ideally we want to do the closed loop test before Christmas,” Brown said.

Claude Ghazer is a reservoir engineer working on the project. He said the core had been one piece of the puzzle, and now all the pieces need to come together. They’ve done XRD testing, elemental analysis, and determined porosity and permeability.

This phase of testing will provide the fluid rates. But by pumping fluid out of the formation, the resulting pressure drop will help them map out the boundaries of the reservoir. Ghazer offered an analogy, saying, “You’ve got a pond and you’re dropping a stone into the middle. It creates ripples and when it hits the boundaries, it can come back.”

Understanding that response is important to developing the geothermal field.

Measuring the pressure transient data and analyzing it with software allows for reservoir modelling.

“You do a lot of this analysis in wildcatting exploration,” he said.

Since there are few wells drilled into the Deadwood formation, the target for this project, they’re in essentially virgin territory. Ghazer said it was a unique opportunity to gather this data because it is undisturbed.

The injectivity test is another key point.

“It’s a flow, build up, injectivity and fall-off test,” he said.

Earlier statements from DEEP implied that a much shallower formation, the Mannville, could be used for injecting the high volumes of brine produced during operations. But Marcia said that could be problematic for nearby oil producers who also use that formation for water disposal, and they “want to be good neighbours.”

While the shallower Mannville is still a possibility, and drilling injector wells to only that depth is much cheaper and easier than drilling 3,500 metre wells to the Deadwood, there is a compelling reason to drill to those depths – pressure maintenance. By putting the brine back in the same formation it came from, Marcia explained, “It adds time and cost to the project, but the benefit is it allows us to keep the pressure up.”

“If our pressure declines, our production declines, and we have less power to sell.”

The results of this work will provide detailed data required for the final subsurface and facility design required prior to full construction. The reservoir data will be incorporated into a full-scale simulation model to design the full production wells, optimal well spacing and full field development. This data will also be implemented to optimize the final surface power facility design.