Pipelineonline.ca – April, 25 – DEEP is taking its last steps towards a final investment decision and major financing

SASKATOON – After several years of drilling and testing, Deep Earth Energy Production Corp. (DEEP) thinks they have figured out how they are going to make their geothermal power production facilities work. They are now going to spend the next six months finalizing engineering and hope to finalize the PPA with SaskPower and plan for financing and last steps to make it happen.

President and CEO Kirsten Marcia spoke to Pipeline Online on April 21 by phone.

The intent of DEEP is to produce low emission baseload electrical power, deriving energy from very hot water deep underground. That water will be used in an Organic Rankine Cycle generator to produce electricity for the SaskPower grid.

The project has continued to evolve over the years and one of the biggest developments is they are now looking to essentially skip the small pilot stage and go right into larger power production facilities. Whereas the initial plan was to develop a 10 megawatt facility, of which 5 megawatts would be needed to power its pumps and other hardware, the new plan scales that up to 35 megawatts. That would be the first of four plants planned, which would provide a total of 140 megawatts of baseload power to the grid.

For comparison, those four plants combined would be very close in size to SaskPower’s Boundary Dam Unit 5, which is slated for retirement in a few years.

However, they still need to power their pumps and facilities, something known as a “parasitic load.” And for that, DEEP is considering using natural gas, either local flare gas, or pipeline spec gas from TransGas, for that power. And emissions from that would be captured in a small-scale carbon capture scheme. DEEP notes this aligns with the federal government’s recent unveiling of a 50 per cent tax credit aimed at spurring investment in carbon capture and storage technologies.

This initial facility is planned for commissioning in early 2025. As envisioned, a four-stage build aims to scale the project to produce approximately 140 megawatts of geothermal power generation in approximately 35 megawatt increments, each increment roughly the amount of power needed to supply 35,000 households.

Phase 1 development plans include one approximately 35 megawatt gross geothermal power facility. That first block is planned where DEEP has drilled four of their six holes to date, about 2 miles north of the US border, and four miles east of the Port of Torquay. The other two wells were drilled along Highway 350, one adjacent to the border, the other near Long Creek, as step out wells, to confirm the geology of the region. 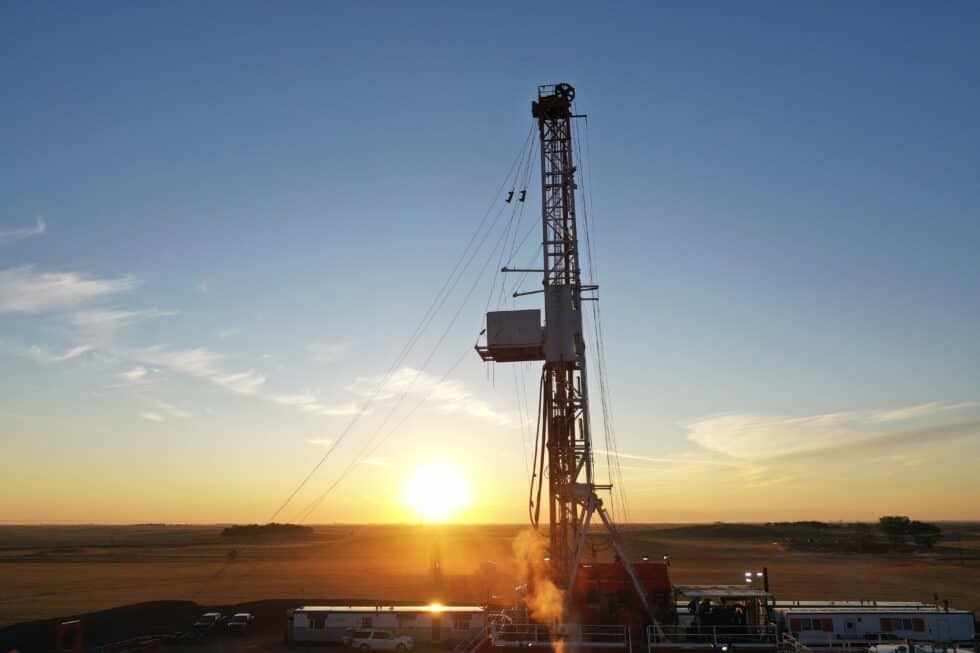 The geothermal field development will consist of 34 horizontal wells (18 production wells and 16 injection wells) to be drilled and completed from the location of the surface facility and four additional drilling pads.

Marcia explained that their initial power purchase agreement in 2017 with SaskPower was for 5 megawatts. It was a pretty standard agreement that SaskPower was using for multiple small power generation projects. But now that they are larger in scale, they’re going to need to revise the agreement, and negotiations are underway.

This comes at a time when SaskPower is being forced off of conventional coal power production by the federal government. Thus, additional power is going to be needed by the Crown utility.

According to Marcia, DEEP thinks they’ve solved some of the key engineering issues involved with bringing up very hot, and very saline water from deep underground. Those include corrosion and pumping.
In a way, it has been like playing a game of whack-a-mole, she explained, but they have gotten to the point where they might be able to put that whack-a-mole mallet away.

Marcia said, “We always knew we had corrosion challenges, but we had anticipated that we could solve that with corrosion inhibitor. And then test work revealed in December that the feed rates would just be at impossible rates. So that made DEEP revisit the subsurface design switch, where we had to use special coated tubing, but of course, what happens when you do that is then you restrict your flow rates, right? You don’t have the original nine five-eighths diameter wellbore. So that then triggered some subsurface redesign, which doesn’t happen overnight.

“That took us a few months to work through, and to work through the reservoir modeling, and make sure that the parasitic loads don’t go up. And we are really happy with where we are sitting.”

The solution for the tubing is to use specially lined tubing.

For surface hardware, they can corrosion resistant material use.

They will be using electric submersible pumps (ESPs), which specialize in moving vast quantities of fluids. And one of the key points is they’ve been able to reduce the expected parasitic load to less than the 50 per cent originally expected. Right now, that is looking like 15 megawatts per facility. Marcia said. “We’ve got that down to less than half, which is awesome.”

DEEP has secured 80 acres of land under an 18 month offer to purchase for the surface area requirements for the first planned approximately 35 megawatt geothermal facility.

Regarding the use of natural gas for powering the pumps and facilities, Marcia said, “When people talk about energy transition, people want to jump from high carbon emission energy all the way immediately to low carbon. And that’s not a transition. Transition is sometimes a blend of both and so the way that the federal government is looking on natural gas, carbon capture and storage, it’s really a no brainer for us to start looking at. Why don’t we use clean natural gas with carbon capture to investigate that as part of the package?”

All of these are the final details that need to be in place for the large construction financing, she said.

“That’s when the banks get involved, that’s when the major equity investors get involved. You know, obviously, no one’s going to put the big dollars into this until there’s a contract in place, right? So that gives us the next few months to get those details wrapped up.”

They are aiming to have those details in place by this fall working towards a final investment decision (FID). GeothermEx, a Schlumberger Company, is a geothermal specialty firm will be asked to review the project for the satisfaction of the investors or financiers. “They’re kind of the gold standard in geothermal,” she said. “Any large institutional investor or bank will go for a third-party opinion, so our thoughts are let’s get them involved right out of the gate.”

In the meantime, they might drill one more well, but she’s not sure. They are going to shoot some 3D seismic this fall once the crops come off. If they do additional drilling, it will be once the larger construction financing is in place.

Marcia is the guest for the Saskatchewan Chamber of Commerce “Energy on Tap” presentation series at Crave Kitchen in Regina on April 28. The event is already sold out.