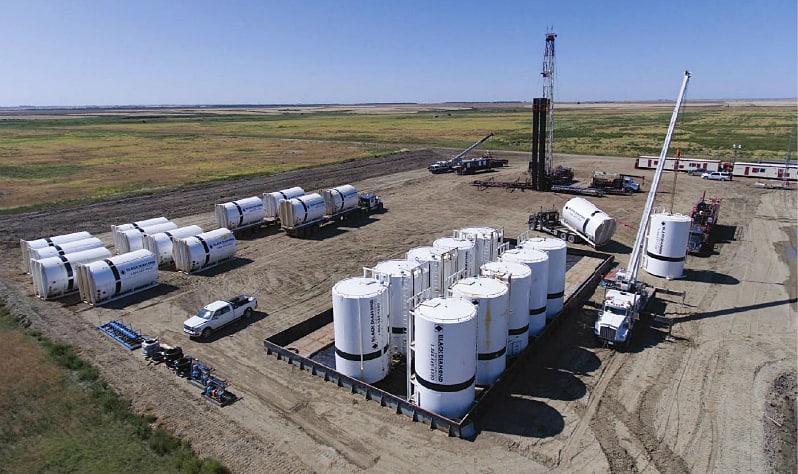 In September, 2018, Resource World Magazine reported on the DEEP Earth Energy Production Corp. (DEEP) team’s geothermal energy project where significant progress has been made since that time.

DEEP, headquartered in Saskatoon, Saskatchewan, is building the country’s first geothermal power plant outside of Estevan, Saskatchewan. The land for the power plant is south of Torquay, near the United States border.

Drilling a geothermal hot water target began in November, 2018. “Geothermal is one of the most dependable sources of renewable energy globally and the only renewable that can produce reliable base-load power that runs 24/7,” said Kirsten Marcia, DEEP’s President and CEO.

The facility will use what is known as organic rankine cycle (ORC) turbine technology to generate clean baseload power. This well-established technology pumps the geothermal fluid through heat exchangers, then transfers that heat to a working fluid (like butane) that vaporizes and drives a generator to produce electric-ity. From a mining perspective, geothermal power generation is heat mining. Heat is the resource with hot brine pumped to the surface in order to utilize this inexhaust-ible source of energy.

This project has the potential to launch Canada’s geothermal power industry alongside the United States, which has been leading this sector globally for decades.

According to Marcia, DEEP’s long-term strategy is to build hundreds of mega-watts of geothermal power facilities with a vision of a cleaner energy future for Saskatchewan, supported by SaskPower’s goal to reduce emissions from 2005 levels by 40% by 2030. The proposed facility would generate renewable, zero emission, baseload power from a hot (120°C) aqui-fer. The produced electricity will be sold under an existing Power Purchase Agreement with SaskPower and will gen-erate roughly the power required by 5,000 homes and offset about 27,000 tonnes of carbon dioxide per year, equal to remov-ing 7,400 cars off the roads annually.

SaskPower announced a power pur-chase agreement with DEEP in 2017, which established a set purchase price for the plant’s electricity. “We’re pleased to complete this agreement with SaskPower as another step towards the commence-ment of Canada’s first geothermal power facility,” said Marcia.

The company has completed drilling the first 3,530-metre test well, the deepest well in Saskatchewan. A second well, now completed, was drilled deeper and directionally to the southwest. The first well will be the injection well and the new well will become the production well, from which geothermal brine will be pumped in-circuit for 60 days to complete the final reservoir and facility engineering.

Slated to begin operations in 2022, the project will create 100 jobs during construction. The power plant has the potential to steadily expand outwards. DEEP aims to eventually generate up to 200 megawatts and create more jobs in the future. The transfer of skills and expertise from the oil and gas industry to a renew-able energy is a boon for the province. Many of the same skill sets used in the oil and gas sector overlap with geothermal development, offering employment opportunities for workers looking to transition out of the oil and gas sector.

The federal government has provided support to get the first project off the ground, including a $25.6 million federal grant in early 2019. As the project moves closer to completion, DEEP is looking into the possibility of using the still-hot waste water for heating local greenhouses and other businesses. There’s also the potential for extracting valuable rare earth elements and precious metals from geothermal brines.

“DEEP’S Saskatchewan power facil-ity will launch a brand new clean energy sector for the country, and we anticipate significant job creation during the con-struction and operation of the facility. DEEP is honored to be in partnership with SaskPower and their commitment to signif-icantly reduce provincial GHG emissions through new and innovative projects like geothermal power,” said Marcia.

Estevan Mayor Roy Ludwig said, “We’re very happy for her and her company.” He noted that the facility will be integrated into the grid already in place, and, “with the three major power plants already in southeast Saskatchewan, this should not put anyone’s jobs in danger. The five megawatts will go right into the grid in the Torquay area and contribute to the overall grid.”

On the topic of jobs, the majority of the positions created by this new facility will be during the construction phase, although there will be positions for main-tenance of the facility as well.

“This is a busy facility whether it’s actually building the plant or the sub-surface drilling, said Marcia. “When it’s actually up and running, it doesn’t take a lot of people to keep the facilities running; it’s very reliable technology.”

Marcia says, “Part of the story that I love is that we wouldn’t even know that geothermal resource existed if it weren’t for the oil and gas industry. When you walk south of Torquay where the project is located, the last thing you think of would be a geothermal heat source. You don’t see geysers or hot springs; the only way you would know that there’s a geothermal resource there is if someone had already drilled it.”

According to Marcia, the deep hot aquifer has been ignored because it doesn’t contain hydro-carbons. She remarked, “Through geoscience and collaboration with our team and support from our provincial government with research that is done every day in our province, we were able to determine that this was an exceptional geothermal resource, good enough for power production.”

Canadians will start to pay more for the gas they burn and the products they buy, but the cost will depend on where you live — and whether your province has its own carbon tax or whether Ottawa is imposing its own, as it did April 1 in Ontario, Saskatchewan, Manitoba and New Brunswick, and as it will on January 1 in Alberta. While we can’t do without fossil fuels, geothermal power production is a good start to avoiding the downside of hydro-carbons.