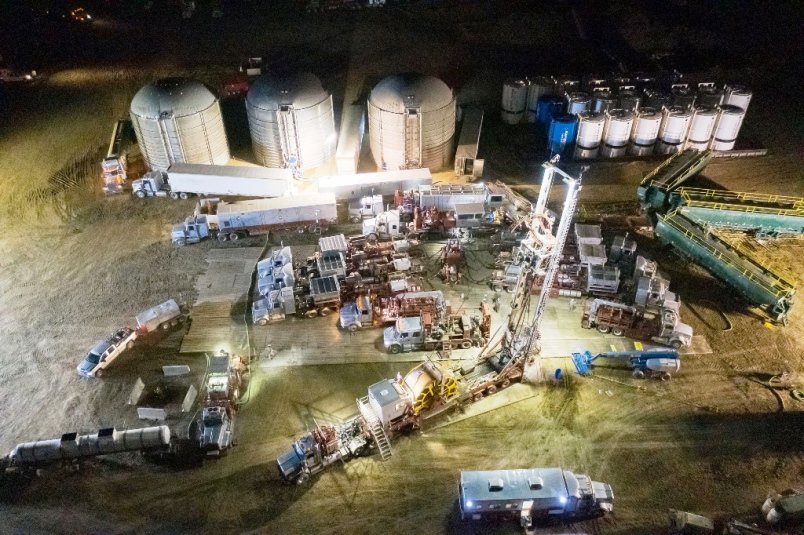 “It’s a remarkably good well,” Marcia said by phone from Saskatoon on Nov. 24.

The well, Border-5HZ, was hydraulicly stimulated the first week of November. This fifth well is DEEP’s first horizontal well. It once again sets a record, this time for the deepest horizontal well in Saskatchewan, at 3,450 metres total vertical depth. It has a 2,000-metre lateral section, which runs due west from the site where DEEP had drilling four of its five wells to date. That site is also planned to be the location of the eventual power plant.

The company is progressing from its exploration phases to final design, further refining its plans. By hydraulicly stimulating the producing wells, they can get more hot saline water out of the rock with fewer wells, and recover that heat though an Organic Rankine Cycle power generation plant on the surface.

The current plan now is to develop the field with five sets of well pairs, with each pair having one well going horizontally west, the other horizontally east. This well, Border-5HZ, is part of the first pair of producers. The next set of wells will be a pair of injectors, in a similar pattern, placed further to the north, with wells going east and west. This pattern will be repeated again, with another pair of producers, then injectors, then finally producers again, for a total of 10 wells – six producers, and four injectors. That pattern is expected to be sufficient to eventually set up a 20-megawatt Organic Rankine Cycle power plant, which will feed electricity into the SaskPower grid.

“No significant issues were encountered during drilling and the geological, operations and Weatherford directional staff were able to maintain the well trajectory in the reservoir target zone for a significant portion of the lateral length. This demonstrates the viability of horizontal drilling, supports the geophysical analysis, and further demonstrates reservoir continuity. The highest temperature measured during open hole logging was 127° Celsius (261° Fahrenheit),” DEEP said in a release. “The well was completed using a 20-stage NCS Multicycle stimulation sleeve system and cemented liner, and subsequently hydraulically stimulated with Element Technical Services as per standard horizontal well completions procedures.”

This fifth well will be producing hot salt water, and that water will be injected into wells Border-1 and Border-3. If necessary, they can also inject the produced water into well Border-2B. “Now we can do a much larger, robust loop test,” Marcia said.

DEEP is working with a company called GeothermEx, which Marcia described as “the largest geothermal consulting group in the world.” DEEP asked GeothermEx what do they need to do in order for construction lenders to finance the project?

Marcia said, “They’ve given us some flow rates that they would like to see sustained for 30 to 60 days. We’re going to double that in this well, so we’re very confident that we’ve got the lending confidence to get this project built.”

Marcia said they are fully financed until the summer of 2021, with room to complete everything they need to do for bankable feasibility engineering and to be in a position to complete the construction financing. However, Marcia notes they are considering an interim private placement.

DEEP also intends on producing its first electricity in the spring, possibly April or May, bringing in a small, one-megawatt Organic Rankine Cycle generator which will generate its power from the hot water from the Border-5HZ well.

“We want to test it in the field, on a small unit, in case there’s something we still need to work out,” Marcia said.

The power will be used onsite for their own power needs.

DEEP is also looking at adding an eight-to-10 megawatt solar power generation and battery facility to the project. The idea is that all 20 megawatts produced by the geothermal plant will be fed to the SaskPower grid. The parasitic load, the power needed to run the facility, including the pumps in the wells, would come from solar and battery generation. Marcia pointed out this has been done in Nevada at the Ormat Tungsten geothermal facility.

DEEP is now progressing from the exploration phase to the development phase. Marcia said, “We’re really advanced the project this year.

“This current design will be refined on the results of this horizontal well. And whether that changes the number of wells, or the spacing of the wells, we don’t know that yet. What we do know is that this well could be a game-changer for us.”

“Here’s what I love: Here we’ve taken world class drilling expertise and technology, horizontal drilling, hydraulic stimulation, all done on the backs of our oil and gas industry. And we’re doing this for the first time in geothermal. No one has done this before. That’s cool.”

She added, “The feasibility engineering needs to wrap up this spring. We have to see the long-term results of this horizontal well. That information gets fed into the subsurface design, which then drives the surface design.”

GeothermEx’s sign-off is the final stamp that they can take to lenders, she said. “It really is coming down to finishing the reporting, get the debt in place, going into construction.”

Green energy is getting attention from investors, and Marcia feels they are well-positioned.

“I do think the timing is right. If there is to be an energy transition at all, DEEP is a perfect candidate to take advantage of that investor interest.”

Marcia said they are building out their team. Tom Kishchuk has been appointed chief operating officer, effective Nov. 25. Kishchuk joined the DEEP team in September 2020 as a special advisor to the management team.

“This project is moving ahead. We are moving from previous chapters into larger chapters. We recognize that we need to build a team along the way to make this happen, and having Tom is really going to be a wonderful addition to the team,” she said.

DEEP’s release noted, “Using his more than 30 years of technical and business management experience in the energy industry he will provide leadership to the surface operations and engineering teams as the project advances to achieve commercial operation of Canada’s first geothermal power plant. Prior to DEEP, Kishchuk was the president and chief executive officer of Mitsubishi Hitachi Power Systems Canada, Ltd., and vice-president operational support for Federated Co-operatives Limited.”